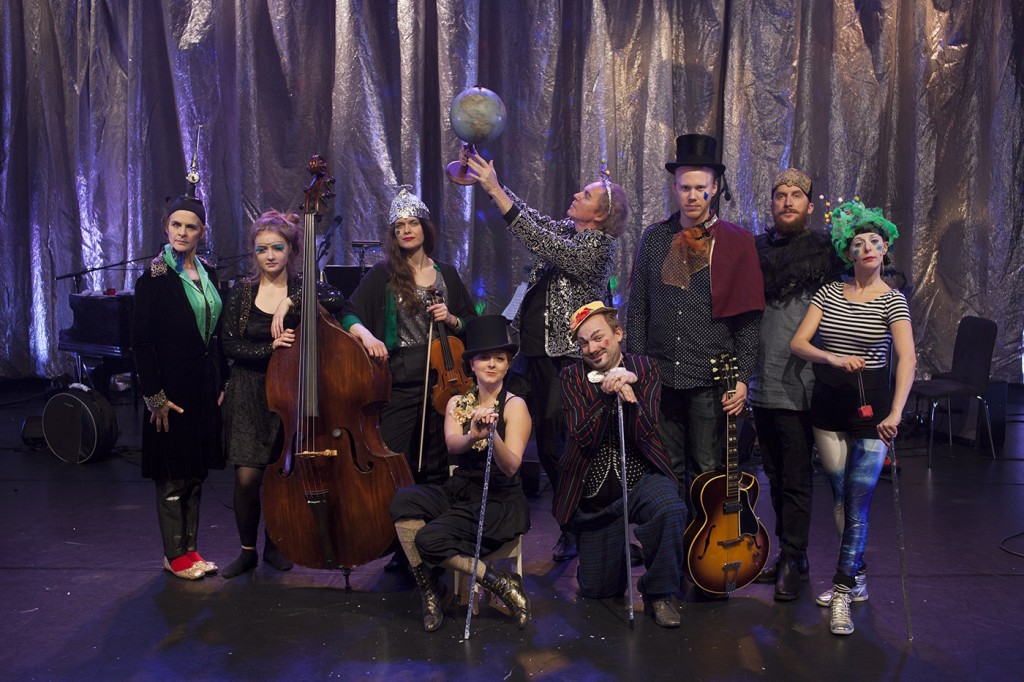 Cabaret Kosmos was created in 2014 in a collaboration between a colorful and diverse group of performing artists. Choreographer Jannine Rivel and NewOpera CO’s Niklas Ryden came to talk about Jannines grandfather, the famous clown Charlie Rivel, and decided to create an art cabaret, including a remixed clown number of Charlie Rivel.

The ensemble consists of Michele Collins, David Sperling Bolander, Jannine Rivel, Clara Gustavsson Karin Wiberg and Niklas Ryden, as well as musicians Magnus Boqvist Victor Olofsson and Georgia Wartel. In the set of Teater Aftonstjärnan in 2015, it was Johanna Ekholm on bass instead of Georgia.

Cabaret Kosmos came to have a space theme that inspired set design and atmosphere. Otherwise, we worked together in the ensemble to develop various actions, dances and the whole format. Niklas Ryden and David Sperling Bolander wrote the lyrics. Jannine Rivel choreographed and created with David a new clown concept. Michele worked out her actions with texts by Gertrude Stein. This is how we describe Cabaret Kosmos:

A group of people have left the earth. During their cosmic journey they look back and remember how it was in the earth, both what was good and what was bad.
With Michele Collins, performance art queen in Gothenburg, David Sperling Bolander, the exceptional scene-music artist, Niklas Ryden, creator of nyopera and Variety Atalante, Clara Gustavsson, the vocalist that is cut out of a thirty’s film, Jannine Rivel, choreographer with roots in both modern dance and circus, Karin Wiberg, violinist and stage artist who appears in many contexts.
Together with the orchestra, they take you to the space center of Kos-Tikk where it is always night and the cabaret run around the clock. It’s nasty lyrics, space music, beautiful vocal harmonies, remixed clown numbers of Charlie Rivel, Django Reinhardt, modern dance, strange noises, dogs on small carts, texts by Gertrude Stein, space debris and a string of unforgettable ballads.

Cabaret Kosmos has been played at Atalante in 2014 and at Teater Aftonstjärnan in 2015 and received support from the Västra Götaland Kulturnämnd twice. Cabaret Kosmos will continue playing 2016-17.